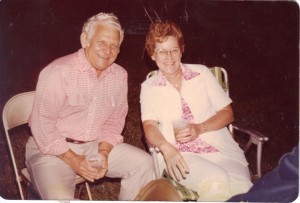 My Dad, Joe and Mom, Terry during one of their good times together.

My Mother, Terry, has been an independent working woman her whole life.  She moved to Las Vegas in 2000 after my father passed away and purchased a lovely home in Sun City Anthem.

Even though she retired to move to Las Vegas, she wasn’t someone who could just relax and do wherever came her way each day.  She wanted to get back to work. So when the Sun City Anthem Community Center opened she started as one of their first receptionists.

Being new to the area she was able to meet and help people as they came in and out of the Center to use the facility, go to the restaurant, set-up the clubs or sign up for shows. She loved working there and everyone enjoyed being around her.  She greeted everyone that came through the front doors and always eager to help.  Then she had a couple falls.

Things for her began to change with each fall, with the last one in November 2011 taking its toll.  Her last month of work was June 2012.

Since she worked full-time her whole life she never participated in outside activities.  Yes, she liked to crochet, garden and read, but these were things she did alone.  So when she moved into an Assisted Living Community she didn’t participate in activities.  The staff at the community confirmed that if people are not active in a particular interest before, they do not participate once they move into assisted living.  And as my Mother said one day, “Bingo is for old people.” and she’s 84.   My Mother was still capable to do work; she just didn’t have any to do.  Since work is what she did and where she found her purpose and self-worth, I needed to find something that she could do to feel that again as well as a sense of control.

So the hunt began. What could she do?  What are things she did before?  What are things that she could do at her community with others just like her?  What are simple and easy things she could do and not worry about doing it wrong?  Volunteer positions?  Didn’t work because of transportation.  She answered phones and greeted people.  A staff person does that.  She worked on the computer.  Has trouble doing that now.  She assembled and sorted: flyers, programs, mailings, packages. That’s it!  But what?

Well, I’m not someone who waits around for someone else to come up with something or solve my problem. I take control and charge forward to make it happen.  Which brings us to part two.